East Cork offers many stunning beaches (including the blue flag beach at Garryvoe), gardens and golf courses within easy reach.

The area is also renowned for its bird-watching. From Ballynamona to Knockadoon Head, this bird-watching trail has been identified internationally as a home to many unique birds, varieties such as the Pale-Bellied Brent Goose, Hen Harrier and the Short-Toed Lark can be seen. Definitely a birdwatchers heaven.

For walking enthusiasts, there is a wide diversity of trails to be discovered, including forest walks at Castlemartyr and Glenbower and a cliff walk in Ballycotton.

Starting at the eastern end, at Youghal we have the Front Strand. This part of Youghal developed as a bathing resort when the railway arrived in 1860. The railway station was built right on the beachfront. No wonder the people of Cork preferred to come to Youghal for the summer! A recent addition has been the boardwalk stretching west to Claycastle beach. This provides the perfect excuse to stroll and clear the mental cobwebs on a breezy day. On a fine summer day you can avail of the fresh Atlantic waters providing a refreshing dip.

The enormous stretch of beach running south west of the Front Stand, and overlooking Youghal Bay, includes Ring and Claycastle as well as Redbarn. The division between these is unmarked and the offshore currents are common to all three. The further you move from Youghal, the better the beach. They also get much more sandy as you move away from Youghal. Ring and Claycastle are very popular local beaches yet they feel quiet beachs with excellent waters for bathing. Redbarn became especially popular in the 1960s when the dancehall there became the prime music and dancing destination on Saturday nights. It is said that the music could be heard as far away as the Front Strand in Youghal!  Mercifully, nowadays things are much quieter at Redbarn.

Rounding Knockadoon Head we have three beaches overlooking Ballycotton Bay. The bay is overlooked by its most prominent landmark, Ballycotton Lighthouse, which is situated on an island off the village of the same name. From east to west the beaches are Garryvoe, Ardnahinch and Ballynamona. Garryvoe is a mixed pebble beach with very shallow waters in the bay. Leave the N25 at Castlemartyr and travel via Ladysbridge to get to Garryvoe with its enormous white hotel. The waters here can be surprisingly warm after a long, hot summer’s day.  There is a promenade path overlooking the beach.  Ardnahinch can be accessed via the village of Shanagarry.  Because Garryvoe can be busy in summer, locals head to Ardnahinch to avoid the crowds.  Ballynamona is best known as a birdwatching venue and is also popular with dog walkers. It’s a lovely, quiet beach, and a better choice if the others are crowded.

Beyond Ballycotton on the south coast we come to the exposed beaches of Ballycroneen and Ballybrannigan. These are located on either side of Ballycroneen village. The beach at Ballycroneen can also be accessed via the Ballycotton Cliff Walk whereas Ballybrannigan, a local gem, is especially popular with dog walkers because of the great expanse of sand and shallow waters.  Don’t forget to poke around in the rock pools to discover some interesting wildlife. There is a car park with a slip access to Ballybrannigan beach.

Inch Beach is located further west, on the other side of Power Head, and near the village of Guileen. It is a very well-hidden, local gem. Access is via narrow and winding local roads leading off the Midleton to Whitegate road. A deep (very deep) and sandy beach between two streams and cliffs, Inch Beach offers a lot of safe and shallow bathing. Inch is also especially popular with surfers. The Inch Surf School may be worth contacting.

White Bay is another hidden local secret. It is located inside the channel leading from the ocean into Cork Harbour. The beach is situated at the foot of cliffs just north of Roches Point. A car park on the road from Whitegate to Roches Point marks your destination. Leave the car there and then descend the long lane down the cliff to the small beach – the path is perfectly safe. At first glance and at high tide White Bay Beach can seem very small, but at low tide there is a nice stretch of sand to play on. One of the benefits of White Bay is viewing the vessels entering and leaving the harbour. A word of warning – take your time going back to the car park – it can seem like a long and strenuous climb up.  At least you can say you got your daily exercise! 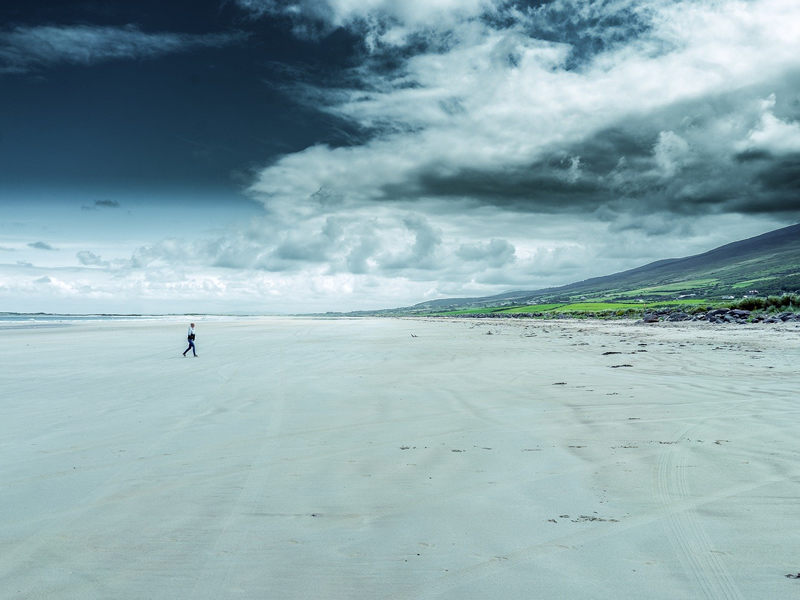