Ballycotton is a famous fishing village situated approximately 40km (25 miles) east of Cork City. The village is set on a rocky-ledge overlooking Ballycotton Bay. There is a busy fishing pier, working lighthouse and a world-famous lifeboat. As well as a shop & post office, pubs, restaurants, B&Bs and a hotel.

The Ballycotton Bay area has a character all of its own. Rich plains, clean and unspoiled sandy beaches, historic towns and heritage centres, rocky bays and dramatic coastal cliff walks and scenery, forested landscapes and walks, less crowds, more peace and quiet. There are small towns and villages, castles, ruined monasteries, a living cathedral and a beautifully preserved round tower at Cloyne, a unique coastal bird sanctuary and at Fota a unique Wildlife Park. This is ideal cycling country, and motoring country too. In the area there are still undiscovered places and secret sandy bays for you to discover and explore.

Ballycotton in County Cork is a small fishing village that in the nicest sense of the word is a dead end… in that, there is no through road… you drive in and to leave you have to drive out the same road again. In a sense, if we need anything we are slightly isolated so it is a case of gather the troops together and get it done ourselves as a community or fight to get what is needed. The village sits on a cliff and the predominating view is of the Atlantic Ocean. For a century or more, Ballycotton was known for its healing sea air, and people came and stayed for their health and well-being. It has always been a walker’s paradise and one popular walk is miles of a stunning, scenic cliff walk. Walking holidays are an area we are keen to build on from a tourist business sense. We also have a pitch & putt course, tennis and squash courts, sandy beaches nearby and natural rock pools for swimming. Fishing has been part of the village for as long as there is a village here and the busy pier is a focal point with working boats, angling and also rod fishing from the pier walls.

The RNLI and our lifeboat is a major part of the village and we are unbelievably proud of both. The most famous lifeboat in the history of the RNLI is The Mary Stanford. She and her crew took part in The Daunt Lightship rescue on February 11, 1936, during which she and her crew saved seven lives. This was her most famous mission. A gold bravery medal was awarded to coxswain Patsy Sliney; silver medals to second coxswain John Lane Walsh and motor mechanic Thomas Sliney; and bronze medals to crew members Michael Coffey Walsh, John Shea Sliney, William Sliney and Thomas Walsh. Despite its historic past, the vessel was sitting neglected for years in a rarely used quay in Dublin’s Grand Canal Dock. Word reached us that the dock was to be cleaned out and any boat not removed by a certain date would be scuppered. The village was in shock so a committee, including descendants of that famous crew, was formed immediately and a project set in motion in October 2013. The plan was to lift the boat out of the canal basin and transport it to Ballycotton — an absolutely mammoth task. There was no money in the kitty but not one person in the village ever said it could not be done… there was no question but the boat was coming home. Words cannot describe the level of effort and hard work from so many but it was inspiring to see when people get together mountains can be moved. Hearts filled with pride and tears flowed when The Mary Stanford was transported up the village to where she now sits on a plinth on the cliffs facing the direction where she and her crew made their brave rescue.

Ballycotton village has a well stocked shop which is opened from 8am to 8pm all year round. There is also a post office attached to the Ballycotton shop. For petrol and diesel there is Brodericks in Shanagarry. You can buy fresh seafood in Garryvoe from Ballycotton Seafood.

We are very lucky in Ballycotton to have a doctor’s surgery. Ballycotton Medical Centre is a high quality family practice run by Dr Sean McCarthy (Tel:+353 21 4647806). The nearest chemist is in Cloyne see Cloyne Pharmacy.

There is a local primary school called Scoil Réalt na Mara Ballycotton. It is a mixed primary school under the patronage of the Catholic Bishop of Cloyne. At present there are four class teachers in the school, a full time Learning Support/Resource Teacher and a Shared Learning Support/Resource Teacher. Also, in the village is East Cork Ballycotton Montessori Pre-School which is run by Niamh Fogerty and is located in the community hall attached to the primary school.

There is a Catholic church called “Star of the Sea”. For mass times please check out Star of the Sea, Ballycotton. For other information contact the parish office on +353 21 465261.

Ballycotton village, a 45 minute drive East of Cork city, is a hilly fishing port much favoured by deep sea anglers. It offers fantastic views over a boat filled harbour to a steep island crowned by a lighthouse. There are cliff walks, and inland an extensive marshy bird sanctuary. The picturesque angling village of Ballycotton is much favoured by deep sea anglers. It has a long maritime history, and it was off Ballycotton in 1837 that the famous steam ship the “Sirius” was lost. She had previously been the first passenger steam ship to cross the Atlantic. Today the Royal National Lifeboat stationed at Ballycotton is one of the most modern afloat. Just off the coast, Ballycotton Island has a 19th century lighthouse.This service has a very commendable history with many famous rescues in years gone by.

Ballycotton lifeboat station opened in 1858. One of the most famous lifeboat rescues was carried out by the Ballycotton lifeboat when the RNLI’s Gold medal for gallantry was awarded to coxswain Patsy Sliney, Silver medal to the second coxswain, J L Walsh and motor mechanic T Sliney, and Bronze medals to M C Walsh, J S Sliney and W Sliney and T Walsh for the service on 11 February 1936 when the Daunt Rock Lightvessel broke away from her moorings. A whole gale was blowing, with a very heavy sea, rain and snow. When the lifeboat put out she met seas so mountainous that spray was flying over the lantern of the lighthouse 196ft high. The lifeboat did not return to her station for three days. She had then been out on service for 63 hours, during which time her crew had only three hours’ sleep. For 25 hours they had no food and all came back suffering from colds and salt water burns. The lightvessel’s crew of eight were rescued. This was one of the most exhausting and gallant services in the history of the Institution.

Ballycotton Lighthouse – Sited on Ballycotton Island, the light was first exhibited on June 1, 1851. The tower was painted black in 1902. In 1975, the light was converted to electricity and the original 1851 optic was replaced by an AGA sealed-beam lamp array. The lighthouse was automated in 1992. For more information check out Commission of Irish Lights – Ballycotton.

The Cliff Walk is from Ballycotton village to Ballyandreen beach along a cliff track where you are flanked by meadows on one side and the ocean on the other. It starts at the end of Ballycotton village (at the y in the road take the right up the hill, the left takes you to the pier). The walk extends over 5 miles on a foot worn track along the cliff face with stunning views and passes Ballytrasna beach. There are many stiles to cross on the route (so not suitable for bikes or buggies).
See what tripadvisor says about the Ballycotton Cliff Walk, for more photos check out Cork Guide – Ballycotton and for more local knowledge check out Ballycotton School – Cliff Walk Project 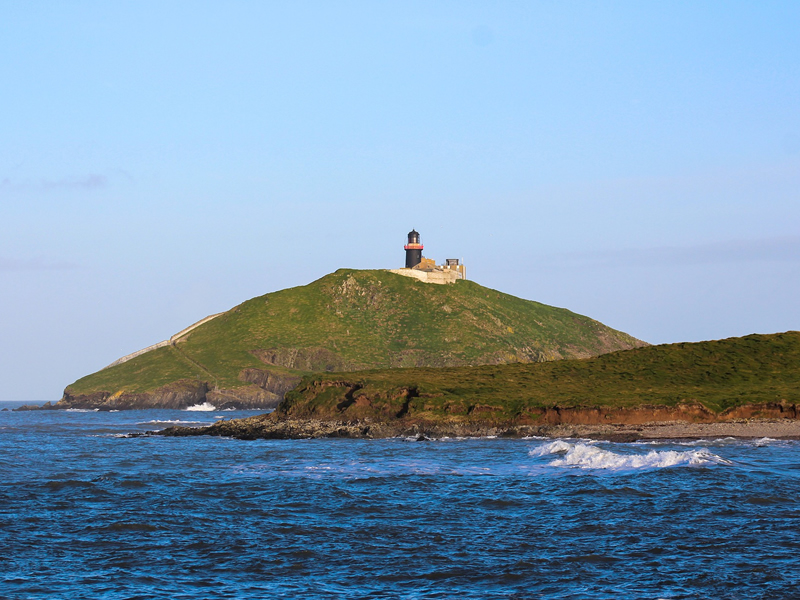